• All animals are sentient beings.
• Like humans, they have the right to humane treatment, respect for who they are, and compassion, and these rights should be protected by law.
• We are against animal experimentation as being cruel and unnecessary.
• We are against the killing of animals for fur.
• Orphaned and injured animals, usually occurring as a result of human actions, accidents or deliberate acts of cruelty, deserve to be given a chance to live.
• The ethos underlying Wild Rescue is compassion and caring
• Hunting is unethical, is not biologically sustainable, and the use of markets as a conservation tool exacerbates the overuse of animals rather than conserves them.
• Hunting with a bow and arrow (which needs no licence) will result in a lack of control, and an increase in the number of animals who are injured causing unnecessary suffering.
• There has been a proven correlation between abuse of domestic animals and human on human abuse, and the same would apply to the abuse of wildlife – whether for “sport”, “fun” or self-aggrandizement with a hunting trophy.
• Many of the wild animals which are abused share over 90% of the same DNA as humans, for example chimpanzees share over 98%, baboons 92% and monkeys 91%. In the case of chimpanzees, humans are closer to chimpanzees than chimpanzees are to gorillas. Abuse of these animals is tantamount to abusing one’s human neighbour, and will perpetuate an attitude of violence by humans against humans.
• Conservation of habitats and the earth’s natural ecosystems is absolutely crucial for the planet to remain sustainable not only for wildlife, but for the homo sapiens species.
• Lack of resources in controlling use of land, and of hunting means that this burden increasingly falls onto individuals and non-profit organisations.
• Education must begin at as early an age as possible, and early awareness and instilling habits of sustainable and compassionate living are the keystones of the education programme.
• An attitude of reverence for life for all creatures and habitats underlies the education programme.
• The keeping of any wild animal as a pet is unacceptable. In particular primates and carnivores, who are very “cute and absolutely adorable” when they are obtained as babies, but will revert to wild habits as they become adolescents, and are then usually chained or caged, given away or killed. It is highly probable that once a primate or carnivore reaches adolescence that an injury to the owner, the owner’s family or friends will occur.
• Using/ abusing any wild animal for human entertainment is not condoned, particularly in businesses such as circuses, where it is only through diabolical training and fear, and often the removal of teeth, claws/ nails, and drugs, that an animal is able to be trained to perform “tricks”.
• Wild Rescue is in principle against any “hands on” interaction of the public with wildlife. The only exception will be with injured and orphaned animals where it is necessary, and in these circumstances interaction must be kept to a minimum, and in the case of orphans, a surrogate mother of the same species should replace the human surrogate mother as soon as possible.
• Wild Rescue is against any petting of any wildlife for 5 reasons:
• It often stresses the animal.
• The animal does not retain the necessary fear of humans.
• It is highly probable that an injury to a person will occur at some stage – a wild animal may be trained, but not tamed – it remains wild.
• It teaches people that animals can be “dominated” by man.
• It stops people from understanding the wild nature of animals, and the way in which they exist in their natural habitats, and under normal conditions.
(This is demonstrated by the number of injuries to people in various game parks, where people forget the wild nature of animals, and get too close without understanding the natural behavioral patterns, and appreciation of these creatures for who they are.)
• Zoos may be categorized by their standard of care. The reality is that the better zoos are playing an increasingly important role in protecting a gene pool of species rapidly becoming endangered in the wild. Many zoos have excellent enrichment programmes, and attempt to mirror microcosms of the natural habitat. However the vast majority of zoos are unethical and keep animals physically and mentally deprived with little allowance for the animals to be who they are meant to be.
• Whilst the sanctuary will not officially be a vegan or vegetarian sanctuary, volunteers will only be served vegetarian/ vegan meals, and awareness of inhumane conditions in factory farming will be part of the education programme.
• Wild Rescue realises that it has an enormous responsibility in taking wildlife into captivity for either short- or long-term (rehabilitation or sanctuary) and must minimise the chances of failure by taking cognisance of the problems/successes of other sanctuaries.
• Wildlife sanctuaries, rehabilitation and education centres should be planned and managed not only on a sound financial basis, but on a healthy ecological basis, and can increasingly form an essential cornerstone of nature conservation in South Africa, and they are being increasingly recognized as such.

“I object to violence because when it appears to do good, the good is only temporary; the evil it does is permanent.” – Mahatma Gandhi

We are the wild.
The feathered, the feral, the free
The hunters, the hoppers, the hiders
The one, the many, the gone
The past, the present, the possible
We are the future, we are your future
We are one. 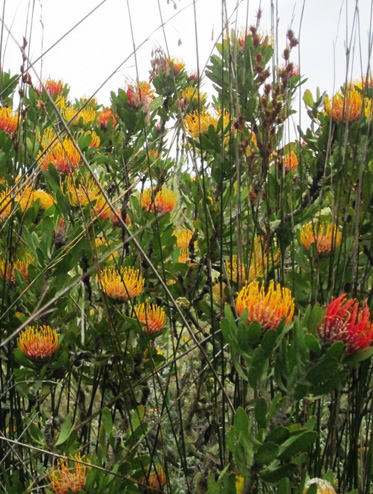